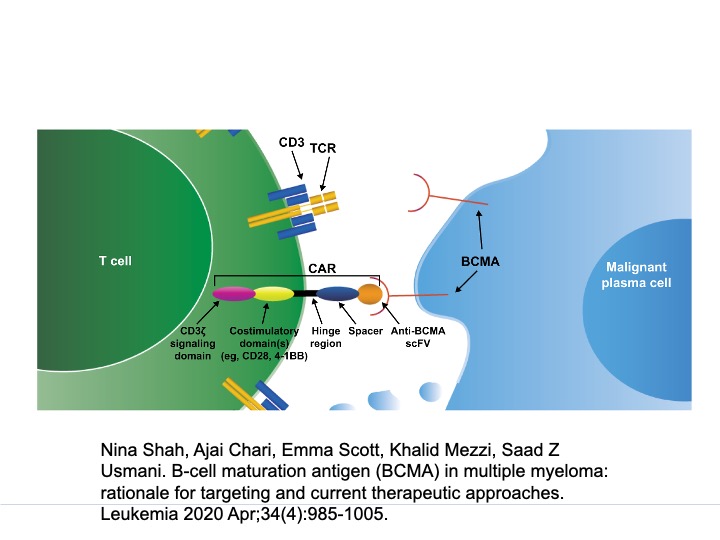 Multiple myeloma is a cancer of plasma cells, which normally reside in the bone marrow and fight infections by secreting antibodies. Myeloma remains incurable despite significantly improved survival outcomes over the past decades. It is characterised clinically by one or more of the ‘CRAB’ features in addition to malignant plasma cells in the bone marrow: hypercalcaemia, anaemia, bone lesions and renal dysfunction. The purpose of treatment is to control the disease, prevent these complications and allow patients to maintain a good quality of life.

Treatment involves different classes of anti-myeloma therapies: immunomodulators (thalidomide, lenalidomide) and proteasome inhibitors (bortezomib, carfilzomib), often in combination with the steroid dexamethasone. Chemotherapy agents are also used, including the drug melphalan, which is usually given in high doses combined with the patient’s own haematopoietic stem cells (autologous stem cell transplantation) to those patients who can tolerate this more intense treatment. More recently there has been great interest in immunotherapies – treatments that harness the immune system. The first of these approved treatments (daratumumab) is an antibody targeting the surface molecule CD38.

The ideal target antigen for CAR-T development should be present on the cancer cell that is being treated while not being presented in normal human tissue. The molecule that has been of most interest in studies of CAR T cell therapies in myeloma is B-cell maturation antigen (BCMA), which is highly expressed on normal and malignant plasma cells. BCMA promotes plasma cell survival and their function in maintaining immunity through secretion of antibodies (‘humoral immunity’).

The most advanced products are autologous CAR T cell therapies, and the production process is much like in lymphoma with collection of patients’ own T cells before re-engineering them with viral vectors to express the CAR construct targeting BCMA. This process can take several weeks, and patients will usually receive interim anti-myeloma treatment (‘bridging therapy’) while waiting the return of the CAR T cells.

Autologous CAR T cells targeting BCMA are undergoing clinical trials and early results are promising, including in patients who have received a substantial amount of treatment for myeloma over many years and typically do not respond to new therapies. The three most advanced products are idecabtagene vicleucel (Ide-cel; bb2121), ciltacabtagene autoleucel (cilta-cel) and orvacabtagene autoleucel (orva-cel).

The early phase data of ide-cel, which uses a lentiviral vector and has 4-1BB as its co-stimulatory domain, shows an overall response of 85% and 45% achieved a deeper complete response. Cilta-cel has a CAR construct that has a llama-derived antibody fragment with 2 binding sites for BCMA, and theoretically improve efficacy through increased binding affinity. Early phase results show an overall response rate of 91%, with a proportion of these patients lacking any detectable presence of malignant plasma cells in the bone marrow (no presence of ‘minimal residual disease’). Although longitudinal follow up of patients and larger trials are ongoing for all these products, it seems that patients may respond for many months but ultimately do relapse and require further treatment.

The toxicities of CAR T cell therapy in myeloma mirror those seen in lymphoma and leukaemia. As lymphodepletion chemotherapy can induce cytopenias and infections related to this in the first two weeks of therapy. The main adverse effects are cytokine release syndrome (CRS) and immune effector cell-associated neurotoxicity syndrome (ICANS). CRS and ICANS typically occur in the first 14 days after cell infusion, although later presentations have been seen with cilta-cel.

Patients with myeloma often have compromised immunity from both their disease and its treatment and the risk of infection is seen both early in treatment, due to neutropenia and the effect of lymphodepletion chemotherapy, and later due to depletion of normal plasma cells from the expanding CAR T cells. Patients may be already receiving infusions of intravenous immunoglobulin (IVIG), and frequently require it after treatment. Ongoing preventative medications against viral infections (valaciclovir) and bacterial infections (trimethoprim/sulfamethoxazole) are common in the months after CAR T treatment.

There are active efforts to improve the efficacy of CAR T cell therapy in myeloma. Strategies include improving the binding and activation of CAR T cells by targeting two different epitopes such as BCMA and CD19 (bicistronic or tandem CARs), increase the expression of BCMA on myeloma cells by inhibiting its degradation with medications such as gamma secretase inhibitors, and using CAR T cell therapy earlier in the treatment course so that patients’ T cells are more ‘fit’ and can function more effectively as CAR T cells. There is also evidence that particular types of T cells are better at persisting after infusion and killing myeloma cells. One trial is examining the combination of ide-cel with another drug (bb21217) that creates a T cell phenotype that may potentially improve the response rate and duration of remission. Allogeneic BCMA-directed CAR T cells are derived from donor T cells and have the potential to be used as an ‘off the shelf’ therapy that does not require lymphocyte collection or bridging treatment, and studies of these are ongoing.

Bio: Dr Shafqat Inam is a haematologist and clinical fellow at Westmead Hospital. He completed his training in Sydney and London, and has an interest in bone marrow transplantation, cell therapies and multiple myeloma.